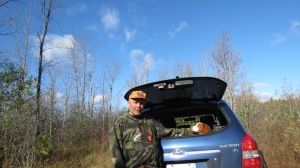 “Good luck in all weathers” the message the author Shirley E. Woods Jr. wrote in my copy of his book Gunning for upland birds and wildfowl. This book is a memoir of the author detailing his evolution as a hunter from his experiences gunning marshes on the Ottawa River and gunning for upland game birds in the Ottawa Valley. I had the pleasure of meeting him at his home in Rockliffe Park on afternoon when I was seventeen years old. Sunday morning, October 20th was cool and blustery. Omer was supposed to join me in the field for some upland gunning, but texted me early in the morning, bowing out as he was not feeling well. I was tempted to stay in bed, hearing the wind outside my bedroom window, but “Good luck in all weathers” sprang to mind. That and the need to get out with Hera as it is her first season and she needs every chance to get into the field. So I got out of bed and off we went for a morning grouse and woodcock hunt. END_OF_DOCUMENT_TOKEN_TO_BE_REPLACED

Friday morning, October 11th, got out to the Marlborough Forest with Hera in pursuit of ruffed grouse and woodcock. Started out at Lester’s Square shortly after 8:00 am. Was dismayed to find some of the horde that overran the cover the previous weekend, but there were not as many as the previous weekend and departed before too long. I swept through familiar areas in the cover, turning up no birds. I checked out an area I usually steer clear of and had two grouse flushes. I got two shots off at the second grouse, shooting well behind it both times. I was using my Winchester 20 gauge side by side, though concerned it might not be working properly. I had my 12 gauge Browning over and under in reserve. We pressed on to a patch of the cover that has held woodcock consistently over the years and sure enough Hera got birdy and I kicked up a woodcock. It was at point blank range so I hesitated before firing, downing it cleanly with the second barrel.

Hera found the downed bird and proudly carried it around, eventually dropping it for me to retrieve. We made our way back to the car. It was about 10:30 am. I drove to the cover at Paden Road and we set out. The cover was nice and wet, but woodcock were scarce. Hera bumped one, it flushed unseen. I moved on to a pocket of cover that usually holds woodcock and put up a grouse. The bird offered me a straight away shot in the open and I found the mark with the first shot. I thought I marked the spot where it fell, but there was no trace of the downed bird. I called Hera and told her “dead bird” she moved on into the thick cover a few yards ahead and found the downed grouse. She proudly carried it into the open where she gave it up to me. There were five more grouse flushes before we wrapped the hunt at 1:00 pm. I shot twice at one of them, missing cleanly. It was a good morning afield with Hera.