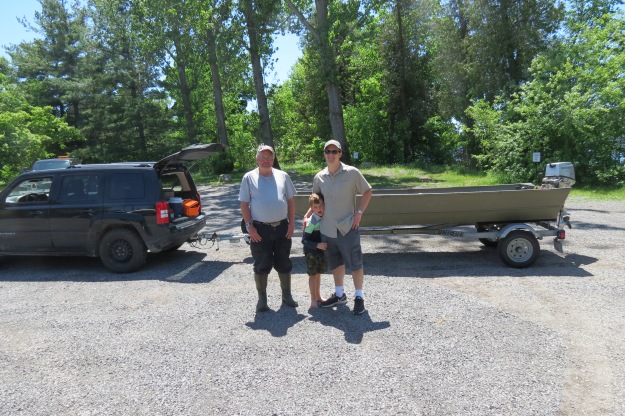 Doug, his son Landon and the author after a morning of fishing on the Rideau River.

Set out this morning as planned for a second fishing expedition with Doug and his young sons. There was a slight change of plans as Doug’s younger son, Tristan, was due at a birthday party he did not want to pass up. This time the fishing expedition consisted of myself, Doug and his older son, Landon. I loaded my gear into the Jeep and left to retrieve my boat from the garage I rent shortly after 7:00 am. I was due to pick up Doug and Landon at 8:00 am. I had time to stop and grab a coffee and doughnut at Tim Hortons on the way to the garage. This time I made sure to notify the owner of the garage I would be coming for the boat this morning. When I arrived at the garage, happily, the driveway was not blocked by a parked car, as was the case the last time I came to retrieve the boat. I hitched the boat trailer to my Jeep and installed the new trailer lock.

I arrived in good time, about fifteen minutes early. Doug and Landon were still getting ready for our fishing trip. Tristan showed me a Lego vehicle he assembled the night before and told me of the birthday party he would attend later that day. I gave Doug some ground venison I brought for him. I still have plenty left from last season’s buck, more than enough to share with friends. We loaded Doug’s and Landon’s fishing gear into the car and were on our way shortly after 8:00 am. Our destination was the W. A. Taylor Conservation Area on the Rideau River, not far from Manotick. There is a boat launch and parking lot among the amenities at the conservation area. In addition, from what I found in searching online, this stretch of the Rideau offers good fishing for small fish, yellow perch, sunfish and crappie. These species of fish are easier to catch than the larger game fish such as pike and walleye. I thought it would be fun for Landon to catch a few perch, sunfish or crappie for this outing.

We stopped on the drive to the conservation area at a bait shop where Doug bought two containers of worms. It was on the way which was handy. When we arrived at the conservation area and found it is busy this time of year. There were several vehicles with boat trailers parked already and we waited as two men launched Seadoos ahead of us. The boat launch is concrete and angled, making it much easier to launch and recover boats. Doug and I had the boat in the water in no time. With our gear and everyone on board in their lifejackets–no one rides in my boats without a life jacket on–Doug started the outboard motor. It quickly sputtered out and refused to turnover despite repeated pulls. Dread welled up initially until I noticed the gas line had disconnected from the gas tank somehow. Doug reconnected the gas line to the tank and this time the outboard motor roared to life. 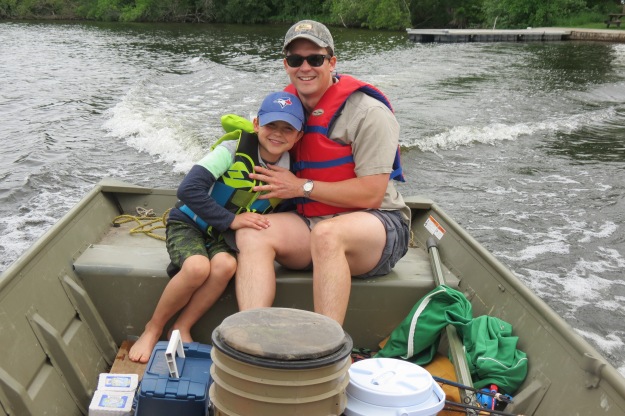 Doug and Landon at the helm as we motored to our fishing ground.

I asked Doug to handle the outboard motor. This way he could supervise and Landon could have a turn driving the boat too. We sped along the river toward Kemptville and stopped at the tip of an island. We anchored the boat and tried our luck with worms as bait in a weedy shallow. Nothing took the bait and we thought it must be too shallow and weedy for the fish we sought. We pulled up the anchors and moved to the other side of the island to a deeper and less weedy stretch of the river. Here we caught a couple of small perch and sunfish. Some of the fish were so small we did not notice we hooked them until we reeled in our lines.

Once more we pulled up the anchors and moved into deeper water where there were few weeds. Doug and I cast a few lines with lures, hoping to have a pike or walleye strike, but nothing obliged us. I caught a small crappie when I switched to a worm on a hook. We turned back and went to the island where we started; only this time we anchored a little farther from shore. I tried jigging with a worm on a hook in the water just off the boat and quickly hooked a sunfish. I released the sunfish after unhooking it. Surprisingly, as my unbaited hook dangled in the water, another sunfish bit and was caught. Doug, Landon and I then had lots of action jigging for small fish in this spot. Landon caught some nice sunfish. Doug caught some sunfish and perch and I caught a nice crappie.

Landon with a sunfish he caught.

Landon and a nice sunfish.

The authour with a bluegill.

The author with his new Ugly Stik and Shakespeare spinning reel.

Things went smoothly as we fished until late in the morning. Still, I found using a spinning reel as tricky as ever. I swear, my hands feel like hooves when I try to cast and reel in the line with a spinning reel. I had a few snags–nothing I could not sort out on the spot, luckily. I think I should probably try a spincast or baitcast reel in place of a spinning reel. When we were finished for the day, Landon drove the boat back to the launch.

Landon driving the boat back to shore at the end of a good morning of fishing on the Rideau River.

Recovering the boat went without any difficulty and on shore we spoke to a man who told us there is good fishing for pike and walleye in the stretch of the river just beyond the Highway 416 bridge. We noted this for our next expedition. Doug decided taking the boys individually works well. It is easier when he can focus his attention on one of his boys at a time when we are out fishing. Next time we head out on the Rideau for some fishing we will bring Tristan and alternate between Landon and Tristan as the season progresses. We had a very good day on the river and I look forward to more fishing expeditions this summer.