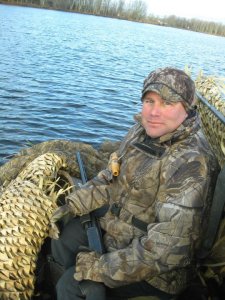 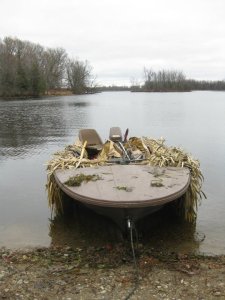 For day four of the rifle season for deer, November 6, 2014, Omer and I opted for a duck hunt on the Tay River. I saw goldeneyes on the Rideau River while running my dog Hera earlier in the week and hoped we would find some on the Tay, a goldeneye hotspot for us in seasons past. I was up at 3:00 am, having breakfast and loading my cameras, shotgun and shells–the last items I load in my SUV before setting out–and made my way to the garage where I store my boat and trailer. I arrived there in good time, the plan was for Omer to meet me there at 4:00 am and we would make our way together to the Tay River, which is about one hour’s drive from the city. Omer was running late, so we met up en route and continued on to the edge of the Tay River, shortly after 5:00 am, still in good time. Legal shooting time started at 6:20 am. This allowed us time to make our way to our site and set out the decoys with time to spare. So far so good it was, but what followed is a hunt that will live on in ignominy. END_OF_DOCUMENT_TOKEN_TO_BE_REPLACED

Gord with a nice drake whistler taken on the Tay River.

Looking back on old entries from my hunting diary I found one detailing a late season diver hunt on the Tay River on November 5, 2006; what is memorable about this hunt is the triple I made on a decoying flock of ducks. The only catch was they were hooded mergansers. I only realized this as I slapped the trigger and three birds fell dead on the water. Readers familiar with mergansers know this species of wild duck is unfit to eat as they eat fish and taste of it when cooked. For this reason, I try to avoid shooting them. It was a good hunt. I enjoyed the effort and the company of my hunting buddy Gord. END_OF_DOCUMENT_TOKEN_TO_BE_REPLACED

Here are some entries from my hunting diary written down during the 2008 season. These entries show that hunting is easy.

The weekend of November 15-16th 2008 was taken up with waterfowling and gundog training. I was up at 0300 Saturday morning making ready for waterfowling on the Tay River with Omer. I was ready and waiting with my boat at 0400, the time we were to meet, only to be kept waiting 30 minutes for Omer to show up. Despite this late start, we arrived at the Tay, launched and set up at the western tip of the marshy island in time for shooting time. There was a great flurry of ducks early on, a mix of goldeneyes and puddle ducks. Omer shot a passing black duck right away, quickly followed up with a drake goldeneye. I missed spectaculary on several occasions, but managed to down three drake goldeneyes, one of which was a lively cripple we thought was lost, but tracked down, shot and retrieved on our way back to the launch site. I was able to lure in a few flights of mallards with my calling, but they stopped short of decoying. We had several flights of goldeneyes and singles come to my decoys. Kudos to Barry Cowan who carved the goldeneye decoys for me. They are so life-like that I mistook a cripple for one of the decoys. The temperature was in the double digits, which is unusual for mid-November, and I was sweating under my warm clothing. There was a light rain which held off until we picked up at about 0900.

Got out with Juno, Nicolas and his German Shorthaired Pointer Cocotte, to the Larose Forest Sunday morning. We started at Ridges, the girls had a good run together. No grouse were flushed. Moved on to Grouse Central, again no grouse were flushed. I am well pleased that Juno took to hunting with Cocotte with no hesitation. She heard pistol shots from the range at the edge of the forest too and was not bothered. It looks as though she is well on her way to becoming a fine gundog.

I made it out to the Tay River on Monday, but navigating the river proved to be as frustrating as ever. I made it out to the spot I selected with a little less trouble than the previous outing, but still had a hard time making my way through the shallow water and muddy sand bars. I put out my goldeneye decoys and five puddlers in a good spot, just beyond the marshy island. I was set just in time for the start of legal shooting time. A flock of several mallards landed by the opposite shore across from the goldeneye decoys, well out of range, right off the bat. I saw and heard lots of goldeneyes flying high over head as the the morning progressed. I made some spectacular misses on a couple of decoying singles, not goldeneyes, then killed a decoying mallard cleanly. I missed spectacularly on a pair of passing Canada geese. Forgot how to shoot a station 8 shot.

I was daydreaming and failed to notice a flock of goldeneyes had come swimming into the left side of the decoy spread. Just as I finally noticed a swimming muskrat spooked them. They got away cleanly as I did not shoot at them. Morning flight was slower than in other seasons. I picked up the decoys at about 0930. I had noted where the downed mallard was. He was just off the tip of the marshy island. He had gone down in a long glide, bounced off the water once, then fell dead on the water. He drifted to the opposite shore. To my dismay I found the water to shallow to navigate and too deep and mucky to wade, so I was unable to retrieve the bird. Then as I was busy picking up the goldeneye decoys a flock of live goldeneyes deigned to drop in next to them. Typical. Getting back to the launch point proved to be a struggle. I really need to learn how to operate the outboard motor in shallow and weed infested waters before next season.

A particular article I read when I was my mid-teens in one of the old hunting magazines my father collected resonates with me to this day. The article in question was penned by a retired US Army officer who lived in Maine. He enjoyed duck hunting on the Penobscot River, gunning for black ducks and goldeneyes in the late season. He hunted with a friend, a man named Dave Bell , a serving officer in the US Army, and noted carver of working duck decoys in Maine. I so enjoyed reading his article as it really piqued my interest in gunning for the common goldeneye. I really wish I could find a copy of the magazine with the article and believe  me, I have tried over the years to find one with no luck. I remember learning the colloquial term for the goldeneye in reading this article. Goldeneyes are commonly called whistlers, due to the distinctive whistling sound they make when beating their wings in flight. The author likened the sound of goldeneyes in flight to that of the sound of artillery shells as they approach the target. I spent many years learning the finer points of gunning for the goldeneye and it is something I look forward to every hunting season. END_OF_DOCUMENT_TOKEN_TO_BE_REPLACED