Stella on her first hunt.

I took the plunge this morning and brought Stella for her first hunt when I took Hera out to the farm for some grouse and woodcock hunting. Stella is six months old and quartering through the cover on her daily run. Yesterday afternoon I replaced her puppy collar with an adult dog collar and put her cowbell on for the first time. She took to her new collar and cowbell without incident. The weekend before, I fired several shots with a starter’s pistol while out on her daily run. She took no notice of the shots from the starter’s pistol. I concluded that she is not gun shy but still wanted to see if she would react to the sound of the 20 gauge shotgun when I took her into the field. I brought Hera and Stella out to the farm near Spencerville–the farm where three of my hunting buddies and myself hunt deer during the rifle season–this morning. We arrived at about 9:30 am, a little later than I anticipated. I try to get into the field by 8:00 am, but I found my bed so comfortable this morning that I was slow getting up to go hunting.

Like every other morning this season, when I got out for some upland gunning, the weather was near perfect. It was cool, the temperature hovering in the low single digits with no wind. Still, it was disappointing to find that the recent rains had not made the terrain noticeably damper. The dry ground soaked up the rainfall like a sponge and quickly dried out. I set out with Hera and Stella across the meadow to the wooded area where recently groomed trails awaited us. When we reached the wooded area, Stella bumped a grouse within seconds. I did not see the bird as it flushed on the other side of a bend in the trail. Grouse in this part of Ontario are typically skittish; they flush wildly and generally do not hold well for a pointing dog. Still, it was good to see there are birds in the cover.

I continued the sweep of the cover with Hera and Stella. I found I had to pay closer attention to the sound of two cowbells ringing through the brush. Hera is a seasoned gun dog–she turned seven on Thanksgiving Weekend. She has mastered running with the cowbell on her collar. She can move stealthily through the cover without the cowbell ringing when she wants. Stella is new to hunting and to running with a cowbell on her collar. Her bell rings constantly. Before long, Hera locked up on point. The moment of truth came as I walked up the point. A woodcock flushed, and I stood, stunned, just long enough for the bird to make good its escape before I raised my shotgun and missed spectacularly. The lingering trepidation as to whether or not Stella is gun conditioned got the better of me. Happily, though, Stella took no notice of the sound of the gunshot. She walked alongside as I followed up the shot with Hera.

An old ladder rests on the floor of a pine grove.

As I worked my way to the stand of cover where my buddy Jason’s deer stand sits at the edge of the swamp that borders the farm, I paused to look at a familiar landmark: the old apple tree. The apple tree was laden with fruit earlier in the season. This morning the leaves are gone — the fruit consumed by the deer who bedded beneath the branches. The old tree looked so desolate. 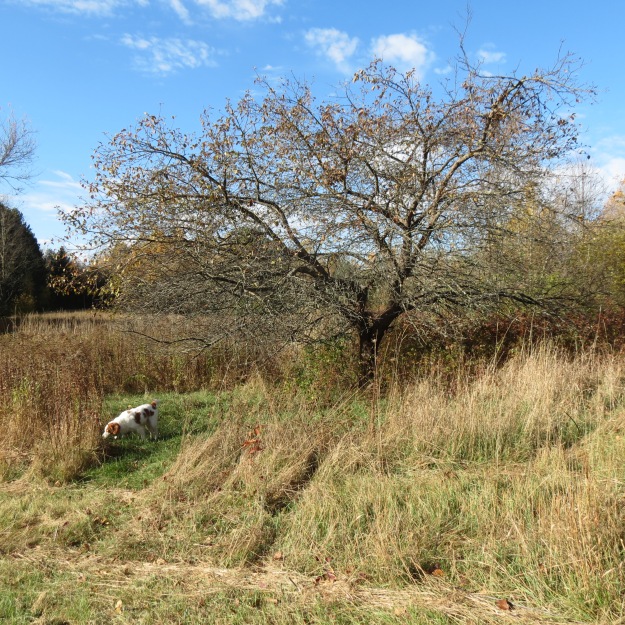 Hera checks the deer beds beneath the old apple tree.

On the approach to Jason’s deer stand, Hera bumped a grouse. I saw the bird briefly as it flew in front of me out of range. As I walked up the downed tree that stands as a barrier in the path to Jason’s deer stand, I thought out loud, “I wonder if there is another grouse in here.” No sooner had I spoken, when a grouse flushed wildly to the left of me. I did not see the bird this time as the cover was too dense. Jason’s stand was fine, and Stella kept up, her enthusiasm unabated. With Stella by my side, I pushed through the cover behind Jason’s stand. As we reached the edge of the cover where the meadow in front of Omer’s stand begins, another grouse flushed wildly. I saw the bird this time. I called Hera and with Stella walked up to the spot I last saw the flushing bird. We made a quick sweep of the area, but the bird had made good its escape.
I checked on my stand as we worked our way back. My stand is fine. We walked past Omer’s stand–it is also in good working order–and I took some photos of the view from Omer’s stand.

Deer cross the meadow in view of Omer’s stand.

We turned up no more birds on the walk back to where I parked. When I put Hera and Stella back on board, Rick, a neighbour of Val’s, came up and asked how was the hunting. Rick hunted deer on the farm for several years. A deer stand he made himself remains on the property — that and a hanging stand that is fused to the tree. The hanging stand is a landmark I look for when I make my way to my stand. Rick and I discussed our deer hunts on the farm and the fact that the swamp is dry. Rick thought that the swamp might have been drained. The beaver dam that held back the water may have been demolished. Rick now hunts deer with a group of buddies in Maitland. He wished my hunting buddies and me well for the upcoming rifle season that opens on November 4th. Though I did not put any birds in the bag on Stella’s first hunt, I am happy that we found birds. Stella enjoyed her first hunt, and I am satisfied that she is not gun shy. I will bring Stella along with Hera for the balance of the upland season. In all, I am pleased with the progress Stella is making in her training as a gun dog.