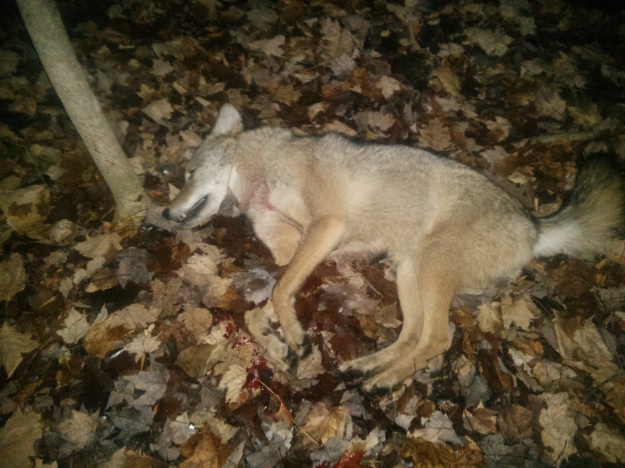 Coyote shot while I was deer hunting in the 2015 season.

To date, I shot one coyote in all my days afield. It was on the opening of the white-tailed deer season, the season before last. I had a buck tag and saw a nice doe come and go while I sat in my stand at the farm near Spencerville where my hunting buddies and I hunt deer. A while after I saw the doe, a coyote wandered into view in front of me. I killed it cleanly with my Browning X-bolt Medallion rifle (left-hand) 30-06 with a 150 gr. bullet. The carcass was left for scavengers and my buddy Jason Quinn, a seasoned hunter and trapper, assured me I did the right thing. Still, I had mixed feelings afterward. I am told coyotes in Eastern Ontario are pests, a threat to livestock and pets. I understood this concern, or so I thought, but decided after killing my first coyote varmint hunting was not for me. What concerned me was the thought this is too close to killing for the sake of killing rather than hunting. I preferred leaving the shooting of coyotes to other hunters, that is, until a recent incident that involved me, my dog Hera and a pack of coyotes.

Wednesday afternoon, December 21st, while I was out running Hera, we had a harrowing experience when we brushed up against a pack of coyotes. We were on a patch of parkland along the Rideau River, a spot I take her on almost a daily basis; a place I have been running my dogs for more than twenty years. It was about 5:50 pm when I heard the yipping and howls of many coyotes not far ahead of us. I called Jason, thinking he would like to listen to the sounds of the coyotes howling. By the time he answered, the howling had stopped, and I told him about the coyotes. He warned me of the threat they posed to Hera, and I made sure to keep Hera close as we made our way back to the car. I promised Jason I would text him when Hera was safely back on board the car. Then suddenly there were three coyotes in front of us. I called Hera, and we moved in the opposite direction, making our way up the paved hydro access road. However, one of the animals followed and Hera confronted it, barking and growling. I ran at Hera and the coyote, roaring like a wounded beast with my hands menacingly raised over my head. Luckily, the coyote hightailed it, and I put Hera on leash as we made a beeline back to the car. 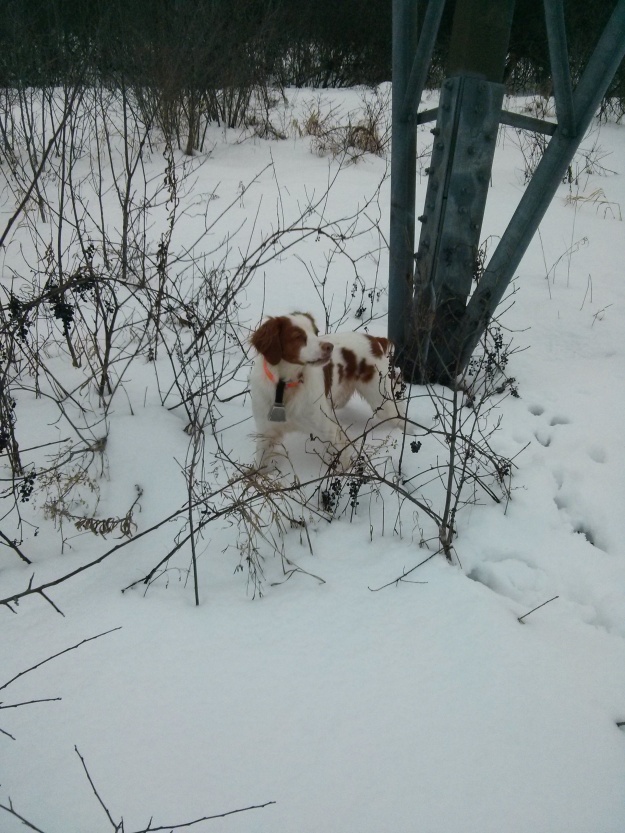 Hera not far from where we had the run-in with a pack of coyotes earlier in the week.

I called Jason when Hera was safely on board and told him what happened. I know enough about the ecology of coyotes in suburban and rural landscapes that they are a threat to pets and livestock, but never imagined it would affect me. I do not doubt the coyote that followed us was trying to lure Hera away from me so that the rest of the pack could attack. I understand that for the coyotes this merely is about survival: they need protein and calories to keep from starving, but for me, the life of my dog makes it personal. While Hera is by far the toughest of the four Brittanies I owned, she is no match for a pack of coyotes. I am counting my blessings that Hera and I got out of this encounter unscathed, but as a precaution took Jason’s dog, Nos, a seven-year-old German Wirehaired Pointer along for Hera’s daily run the next two afternoons. Nos is 80 lbs. of muscle and teeth and having him along gave me a little peace of mind. Beyond that, the misgivings I held concerning coyote hunting are gone. From now on when I am out hunting the policy is no quarter: none asked and none given when I see a coyote. I will shoot coyotes on sight.

Jason with Nos and Hera out for a run.

Jason and I will take to the field in the new year in pursuit of coyotes that roam on the property near Spencerville where we hunt deer. I am satisfied that predator hunting is not killing for the sake of killing. Predator hunting is one of the roles hunters take on in the management of wildlife populations in Eastern Ontario. We take Hera and Nos hunting on the property also, so for their sake we will do what we can to minimize the threat coyotes pose. Predator hunting is new for me, and it will be an exciting challenge for the new year, but I am sure under Jason’s tutelage I will learn and become proficient at coyote hunting.