Akber and his son Abbas at Schäfer’s Wood after a morning of upland gunning in the Marlborough Forest.

“Hunt the edges,” wrote Shirley E. Woods Jr. in his memoir Gunning for upland birds and wildfowl. This is sound advice if you want to get into grouse and woodcock while out hunting. In fact, I learned over the many seasons I hunted grouse and woodcock it is the premise on which successful upland gunning is founded. An edge is where two different types of wildlife habitat meet. Where three or more types of wildlife habitat meet is called a corner. These are the areas to hunt when you want to get into birds whether you hunt over a dog or not. I had this thought in mind Sunday morning, November 6th, the day before the opening of deer season, when I drove to pick up Akber, one of my newer hunting buddies, and his son Abbas who is ten years old. One of the pleasures of hunting for me is mentoring new hunters, sharing with them what I learned over the years and most importantly, guiding them to becoming safe and ethical hunters. Akber and I became hunting buddies three seasons ago if memory serves and this year his son Abbas expressed interest in coming along. I accompanied my father and uncle in the field when I was nine years old and enjoyed myself so I welcomed the opportunity to introduce Abbas to join us in the field.

It was late in the season for woodcock and I hoped Abbas would not be disappointed if we turned up no birds. I got into birds the day before when I was out on my own with Hera, nine to be precise, but what I saw most of was deer hunters making ready for opening day. We arrived at Cowan’s Corner shortly after 9:00 am and set out with Hera who promptly got on to old scents, finding the birds were long gone. This is not unusual at this stage of the season. As we made our way through the cover, I pointed out the different types of habitat that come together at Cowan’s Corner. It is a mix of lowland bog with cedar and aspen that opens into a meadow. On one edge of the meadow there is a stand of pine and tamarack. When the lowland bog is nice and wet, the area attracts migrating woodcock and the upland cover is a good spot to turn up grouse.

View of Cowan’s Corner late in October during the 2016 hunting season.

We turned up no birds in the area I hunted the day before, but we pressed on to another spot I left undisturbed the day before. I prefer not to go to this spot as it means taking a forest trail that runs parallel to one of the township roads, the road I take getting to Cowan’s Corner, and I do not like running Hera so close to a road. We made our way carefully to the spot and sure enough, Hera locked up on point in a clump of cedar next to a fence, bordering on a meadow on what was once farmland. I walked up the point and a woodcock flushed, flying out of the cedar where I asked Akber to stand and watch. He fired twice and downed the bird cleanly. 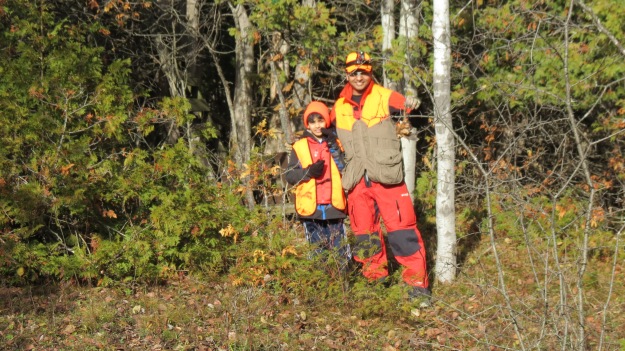 Akber, his son Abbas and a woodcock shot over Hera’s point at Cowan’s Corner.

We continued our sweep of the spot and Hera locked up on point once more, also in a dense stand of cedar. I had trouble finding her and as I drew near, she jumped the gun, bumping the bird (a woodcock) before I was in position for a shot. As we made our way back to the car, I pointed out to Akber and Abbas some of the songbirds we saw and heard. Bluejays squawked in the distance, robins flew out of the trees ahead of us and chickadees flitted around us along a stretch of the trail. I stressed the importance of knowing how to identify both game and non-game species when you are out hunting so you avoid shooting non-game birds by mistake. I added that when I grew up some of the people I came across in the hunting fraternity did not set the best example. For some, red squirrels and songbirds were acceptable targets if you do not find the desired game. This is not okay and I have no tolerance for people who engage in this despicable behaviour. This is not hunting; it is killing for the sake of killing and I condemn it unequivocally. On a positive note, I concluded that part of the fun of hunting is learning about the habitat that supports not just the game you are after, but all the varied species (like the songbirds we saw during the hunt) you find in an ecosystem.

We drove a short distance up the forest trail to another patch of cover at Cowan’s Corner that borders on a beaver pond. Hera locked up on point in another clump of cedar at the edge of a meadow. I walked up her point and flushed a woodcock. I cried out “cock up” to Akber who got a shot off and missed. A few minutes later Hera locked up on point, this time in front of a tall spruce standing at the edge of a pine thicket. I walked up her point and this time a snowshoe hare bounded from under the lower boughs of the spruce. I fumbled with the safety on my Franchi over and under, yet again, but got a shot off, missing spectacularly. 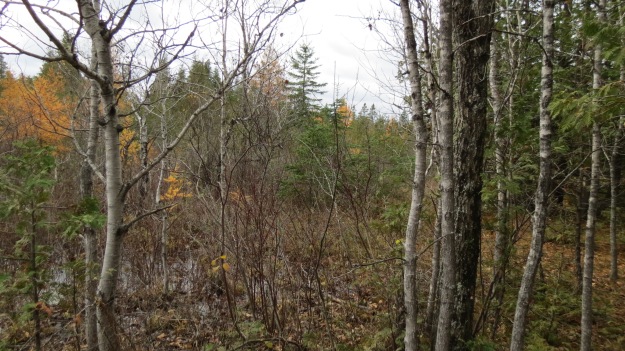 A neat packet of cover at Cowan’s Corner bordering a beaver pond.

We ended the morning taking a quick sweep at Schäfer’s Wood where a grouse flushed wildly in a stand of hardwood. I drove past Schäfer’s Wood the day before and it was vacant, but this morning we came across some parked vehicles, a camper and a portable outhouse. Deer hunters set up camp, no doubt, so we decided to quietly conclude our hunt and take our leave as a courtesy to the deer hunters. I think it was a good introduction to upland hunting for Abbas. His father bagged a woodcock and we turned up four birds (three woodcock and a grouse) and a hare in a morning afield. In two years Abbas will be old enough to enroll in the Hunter Apprenticeship Safety Program. Between now and then, his father will guide him in his development as a young hunter, seeing he learns how to conduct himself in the field as an ethical and safety conscious sportsman. It pleases that I am able share my knowledge and experience as a hunter and naturalist with Akber and his son Abbas in the process.